On Hawaii’s Oahu Island is Kaʻena Point.   It’s remote, rugged and totally unlike the other sand borders surrounding the island.  Hawaiian legend says that it’s the ‘jumping off’ place for souls leaving this world. 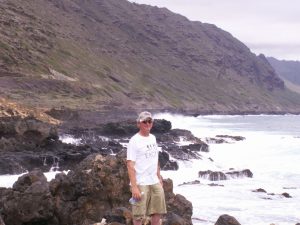 Ka’ena Point was brought to mind by the news of the volcano erupting on the Big Island. As I write this, Kilauea has been on a month-long rampage.  Seeing the photos and videos of the lava flows, it’s now much easier to imagine the activity, some 5 million years ago, that created this starkly beautiful, but rather unsettling, scene.

I spent a week on Oahu in October 2009.  During that week, we travelled to Kaʻena Point.  You can reach it from the south along the western coastline highway from Honolulu but our way there was around the eastern part of the island passing the spectacular North Shore area.  We’d already spent a few hours on Sunset Beach, which is just as amazing as you’d expect.  I had no expectations of Ka’ena Point.

Locals and tourists enjoy Oahu’s North Shore and tourists are all over the place at the Dole Plantation.  They are both just a short distance from Ka’ena Point State Park.  You won’t find many locals or tourists here.  We saw one other vehicle, parked in an area where vehicles were prohibited, and no other people. 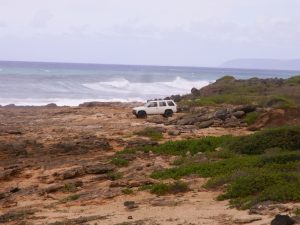 Shouldn’t have been driving here

I’m told that in 2014, the area was secured so that vehicles can only reach this area with a permit.  Five years earlier, it was very easy to take a vehicle equipped for off-road excursions around the barriers.  We weren’t looking for people.  You can find plenty of them elsewhere in Hawaii.  The many other living things were so very much more interesting.  Monk seals were the most prominent residents.  The tide pools were loaded with fish.  I read that the area is the home of the state fish of Hawaii, the humuhumunukunukuāpuaʻa.  I can’t confirm that as I don’t have any idea if I saw one.  I also am not attempting to pronounce it.

I’m told this is one of the best locations in Hawaii for snorkeling.  I don’t do that so can’t attest to it but seeing the many colorful fish in the tide pools, it’s easy to believe the effort would have its rewards.

We were only hiking, not swimming or sunbathing.  When you go, regardless of your plans for spending the day, prepare for it.  You’ll need the usuals:  sunscreen and water.  You won’t be coming across any comfort facilities along the way. 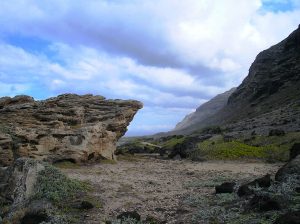 Here’s what the State of Hawaii Department of Land and Natural Resources has to say:

Relatively remote wild coastline with picnicking opportunities and shore fishing. Large sandy beach at Keawa’ula Bay with board surfing and bodysurfing for experts and swimming only during completely calm conditions in the summer; lifeguard services.

I can’t say much more.  You can perform an independent search for information about the spot.  I can only say that if you’re traveling to Oahu, make this a stop.