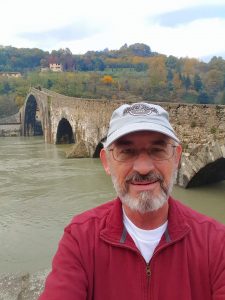 Selfie at the Devil’s Bridge in Tuscany

In late November of 2016, I had a business reason to visit Lucca, Italy.  I was interested in the trip since I had never been to Italy.  I knew, of course, that many people seem to be fascinated with the country, especially the Tuscany region.  I always intend to learn and understand the history of the places I visit and Tuscany has thousands of years of recorded history.  There would be no catching up to all of those years and events but I would certainly get a taste of what it is today and what occurred there in the past.

By itself, I found the Lucca that existed within the walled city to be delightful and I wandered the streets and visited the shops joyfully.  While there, I learned that the First Triumvirate, (the informal political alliance during the late Roman Republic involving Julius Caesar, Pompey the Great and Marcus Crassus) was formed in this little city.  This place had a history!

I want to write more about Lucca, but the subject of this post is the Devil’s Bridge that is just a few miles outside of the city limits.

There are so many ‘Devil’s bridges’ in Europe.  The ole soul was seemingly a busy guy in medieval times!  There are ten in Italy (according to Wikipedia) and at least forty-nine in France.  A friend told me that the Devil had something to do with the Giant’s Causeway in Northern Ireland, but I’m not sure.  It seems that pagan gods were at work there.  That, too, is another subject.  On this particular day, we went to see the bridge officially named Ponte della Maddalena over the River Serchio near Borgo a Mozzano. 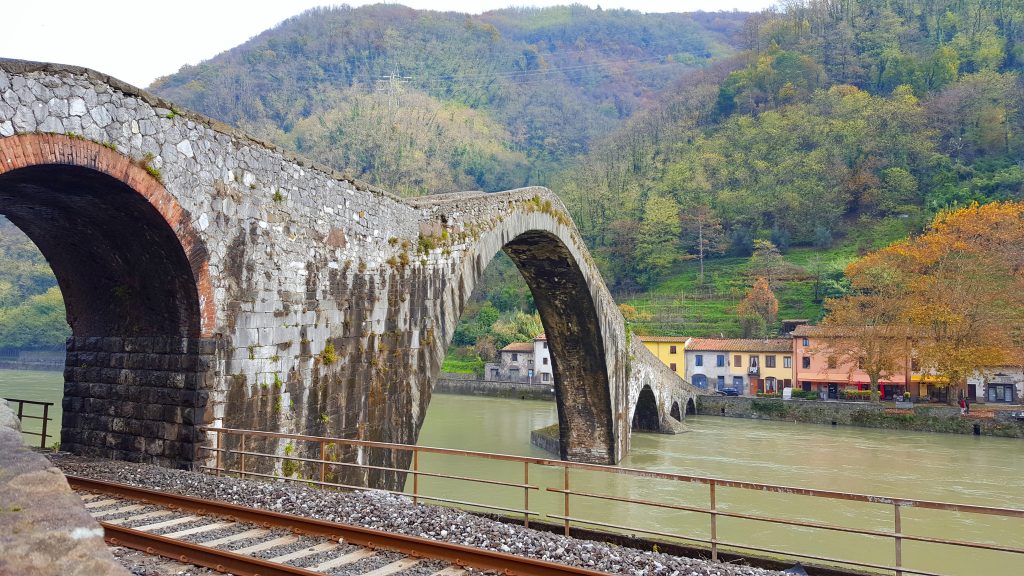 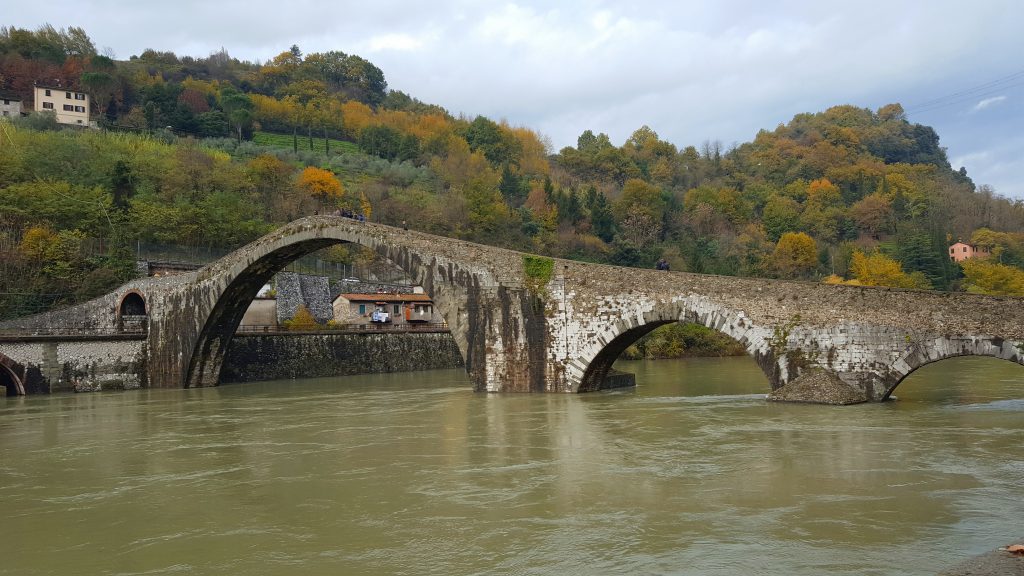 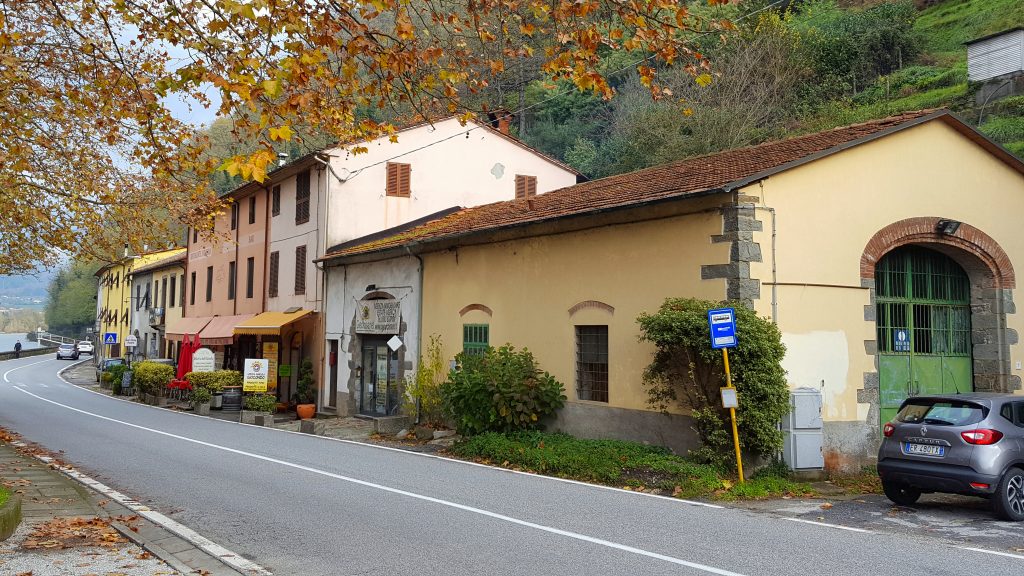 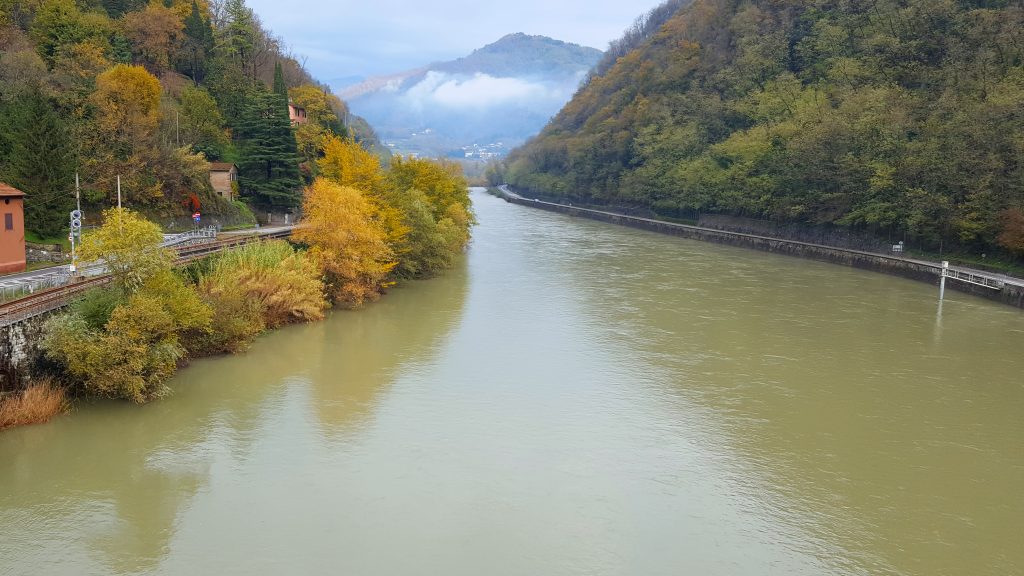 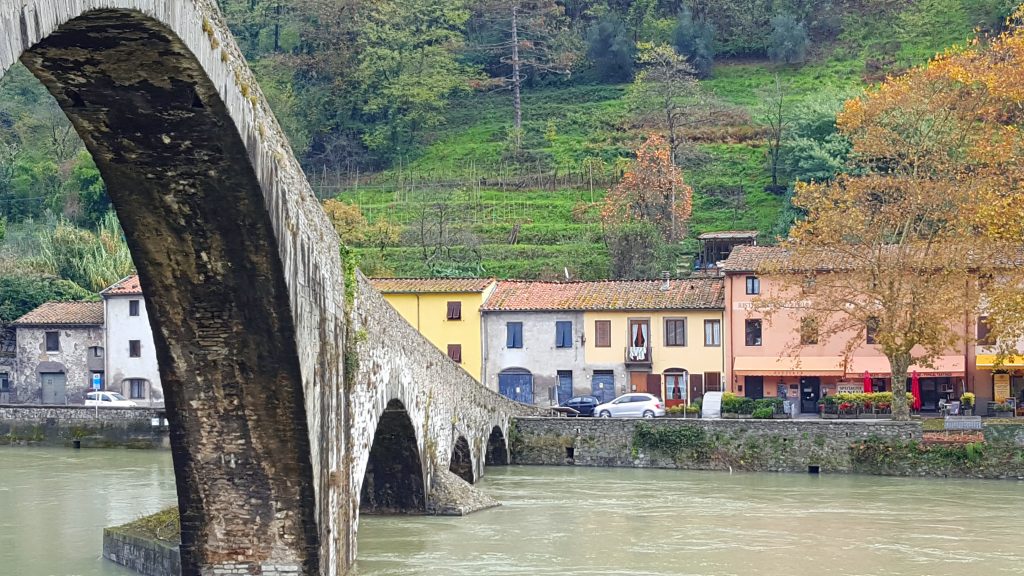 The legend of this bridge, as it regards the Devil, is similar to that of many other similar structures.  In a nutshell, the person charged with completing the task of constructing the bridge realized he was unable to do so in the required time.  The Devil stepped in.  He could finish the project.  He could do it over night, even.  His price would be the soul of the first to cross.  You can look up the story if you have an interest.  It ends, more or less happily, except for the poor pig that crossed the bridge before any people stepped foot on it.  The Devil, in his humiliation and rage, then threw himself into the Serchio and was never heard from or seen again.  See…….happy ending!

In fact, the bridge was built sometime in the 11th century when the Duchess Matilda di Canossa ruled over northern and central Italy.  The intent was to join Lucca to the strategic Via Francigena, the chief route of pilgrims to Rome from all of Europe and to facilitate trade in the Holy Roman Empire.  It was named for the saint Maria Maddalena de’ Pazzi during the 16th century.  It is a remarkable feat of engineering.  Even more remarkably, it was not destroyed during the second World War.